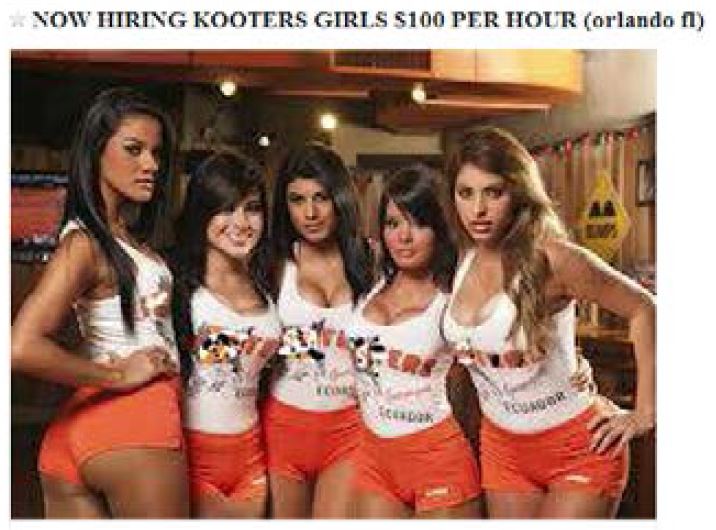 The complaint alleges that Nikki’s Escort Service and its owner Nikki Swafford used Craigslist to entice cocktail waitresses to join the escort service.  In particular, Nikki posted an ad on craigslist in Florida that said “NOW HIRING HOOTERS GIRLS $100 PER HOUR.”   In addition, the ad included a picture of a female waitress wearing the hooters uniform in a hooter restaurant.  One might think that a cease-and-desist request would end the dispute.  Most likely, the hooters trademark attorney also thought the same.  However, when the trademark attorney contacted Nikki’s, Ms. Swafford profanely responded and hung up.

To the Hooters trademark attorney’s surprise, the ad changed after the phone call.  The craigslist ad thereafter read “NOW HIRING KOOTERS GIRLS $100 PER HOUR” but left the picture of the Hooters waitress on the advertisement.  This likely infuriated Hooters.

A question that could be raised is whether Hooters can have any trade dress rights in the Hooters uniform.  Trade dress rights are only available when the trade dress is nonfunctional when taken as a whole.[6]  This raises the same question that existed in Dallas Cowboys, ETC v. Pussycat Cinema.[7]  In that case, the famous movie “Debbie Does Dallas” used a uniform confusingly similar to the Dallas Cowboys cheerleader uniform.  The Defendant trademark attorney argued a uniform is purely functional and therefore the uniform is not enforceable as a trademark.  The argument of the defendant’s trademark attorney fell flat because the Cowboys uniform consisted of an arbitrary combination of white vinyl boots, white shorts, a white belt decorated with blue stars, a blue bolero blouse, and a white vest decorated with three blue stars on each side of the front and a white fringe on the bottom.  That Court found that it was the particular combination of colors and collocation of decorations that distinguish the Cowboys uniforms from other squads.  According to the holding in Pussycat Cinema, it is more than likely that Hooters has trade dress rights on their very identifiable uniform.

Tarnishing a trademark requires that the use of the trademark causes a negative association, linked to products of shoddy quality, or is portrayed in an unwholesome or unsavory context.  In the case of an editorial or an artistic parody, the use of the trademark or trade dress would not be actionable under an anti-dilution statute.  However, the instant case involves a purely commercial activity, all-be-it and in all likelihood an illegal commercial activity.

It will be interesting to watch this case play out over the coming months.

About the Author: Matthew Sean Tucker

Matthew Sean Tucker is an Attorney practicing with a particular focus on patents, trademarks and personal injury, including car accidents, slip & falls, and dog bites, and other acts of negligence. Matthew holds a B.S. in Electrical Engineering from the University of Central Florida. Furthermore, Matthew received his J.D. at the University Of Baltimore School Of Law with a dual concentration in intellectual property law and business law. He is also a member of the Florida Bar, and an inventor of several patent pending inventions.